The King’s Chair by Alan Reynolds 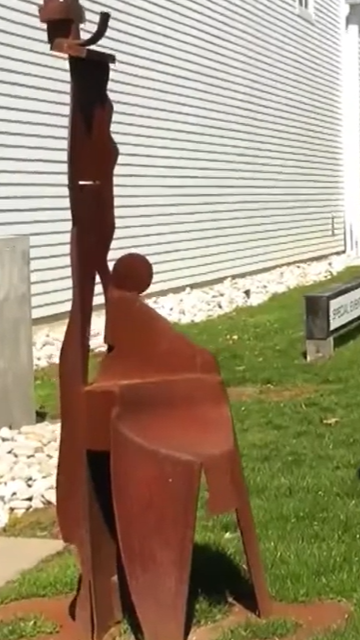 Literature:
Originally working in wood, Alan Reynolds turned to welded steel early in the 1980s, partly because of the structural limitations of wood. Reynolds adapted his vision to the new material with surprising speed and was soon producing sculptures of cylinder and tub shapes with attached lips and rims fused into the surfaces. As a result, the works inclined towards the expressive devices of functional pottery and traditional sculptural modelling. “The King’s Chair” is a great example of this. His later works would then incorporate strong references to the human form.

About The Artist:
Born in Edmonton in 1947 Leslie Alan Reynolds is a constructivist sculptor with a strong influence in Edmonton’s art community as he continues to live and work in Edmonton. His art has had a considerable influence on younger sculptors in Edmonton. In 1990 a survey exhibition of his work entitled Inner Motifs: Fifteen Years of Exploration was organized by the Edmonton Art Gallery.