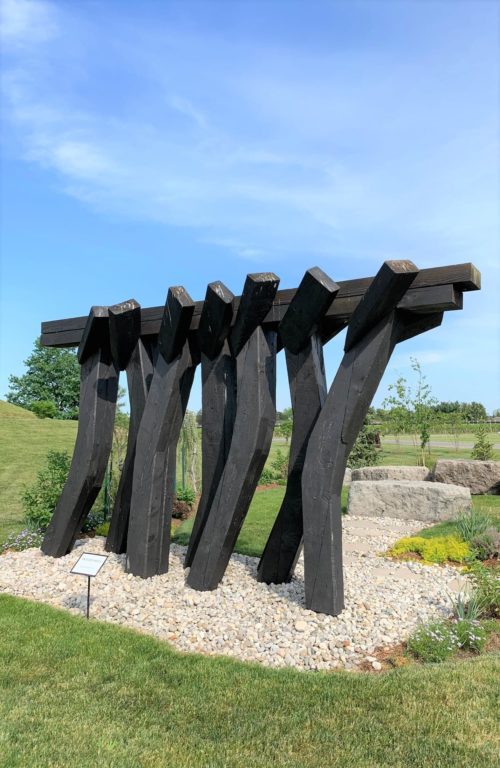 Literature:
Previously installed in 1991, “The Endless March” was part of Brock University’s Lutz Teutloff collection; however, due to severe wood rot, the sculpture was eventually moved into storage. Ten odd years later, 13th Street Winery president Doug Whitty reached out to Brock staff and Averbuch in the hopes to reinstall the sculpture for public viewing. With the university and artist’s approval, Doug reached out to friend and carpenter Maurice Theissen, who later assembled his talented team of Abu Kamara and brother Robert Theissen to assist him in the restoration process. Staying true to the original design, the adapted Averbuch piece is constructed from 6×12 Douglas fir and pinned with 3/4″ diameter wooden pins. The restoration was completed in August 2015.

Averbuch’s imagery and personal vocabulary draws from his life experiences and external cultural influences. Recurring symbols include organic forms and natural elements; figurative forms referencing the human body; manmade objects and architectural forms. His themes range from civilization and its history, growth, transformation, the inevitable passage of time, dreams and memory, the relationship between text and image and the conflict between our aspirations and our limitations

About The Artist:
Ilan Averbuch is a sculptor living and working in Long Island City, New York. Averbuch creates large scale monumental artworks and installations for gallery and museum exhibitions in addition to outdoor public space. Ilan was born in Isreal, in 1953. From 1976-1977 Averbuch traveled to North and Sount American living between the Cordilleras and the Amazon region, a formative trip that solidified his intention to become an artist. Receiving his MFA in 1985, Averbuch’s public sculptures can be found in India, Israel, Poland, Germany, Switzerland, Canada and throughout the United States.