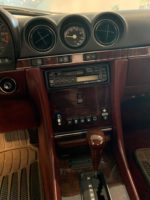 The mid to late 1980s was a rough time period for the automobile. Regulations in most markets were strangling and even the luxury car market was not immune to the effects. In an effort to overcome these trying times in automotive history, Mercedes-Benz expanded its line of SL-Class cars for the American market. The result was the 5.6-liter V8 powered 560SL.
The 560SL was the last in the venerable R107 series (also known as the W107), which ran from 1972-89 and – true to form for Mercedes-Benz. In 1989, Mercedes launched it’s last version and by 1990 it had retired the W107/R107 chassis.

Introduced to the market in 1986, the 560SL is still considered an icon among enthusiasts today. Its subdued understated elegance mixed with the most powerful V8 option for the SL-Class at the time, made it one of the most commercially successful Mercedes vehicles up to that point. The most desirable of the four year model was its last year. In 1989, the 560SL stood for the best that Mercedes-Benz had to offer and for many enthusiasts, this is a sentiment that still rings true today. With less than 6,000 examples being produced, a clean low-mileage example from 1989 is hard to find.

The 560SL has maintained its reputation as a powerful, reliable, well-appointed and classically-styled luxury automobile.

This beautiful white 1989 Mercedes-Benz 560SL with burgandy interior is in excellent condition.
A one-owner car with only 60,000 miles.