Canadian artist York Wilson was born in Toronto in 1907. He studied at the Central Technical school and then began working as a commercial artist. He later moved on to work at leading graphic design company Sampson-Matthews, where he worked alongside Franklin Carmichael and A.J. Casson, members of the Group of Seven. He painted more than a dozen human comedy canvases between 1939 and 1949. These works reflected degrees of satire and social commentary. In 1949, Wilson was highly inspired by a trip that he took to Mexico. The beauty of the Mexican landscape encouraged him to abandon his commercial art for fine art. For most of the 1950s and 1960s Wilson painted abstractly, though he always practiced some figure work.
In his comprehensive biography of Wilson, critic Paul Duval states that “York Wilson is a key figure in relating us to both the old visual world of realism and to the new resonating world of touch and echo and pattern…..represents a major endeavour to comprehend and to replace the established verities of visual space. Going along with this effort to update our awareness of the new scientific world was his sharing an intellectual dialogue with the educated people of his milieu. He also shared in the artistic benefits of his time of scientific change.”
Wilson’s relentless experiments with abstraction resulted in a highly eclectic body of work, including a precise geometric style of painting. He also gained a reputation as a muralist in Canada, working on a series of prominent public works from the mid-1940s to the mid-1970s. He completed murals for Imperial Oil, the O’Keefe Centre for the Performing Arts (now The SONY Centre For The Performing Arts), Bell Canada, the Ontario government at Queen’s Park and Carleton University.
Wilson’s work was well-received overseas, especially in France and Italy. In 1961 Wilson was invited by the French government to mount a solo exhibition in the Paris gallery of his choosing, and in 1981 he was asked to paint a self-portrait for the permanent collection at the Uffizi Gallery in Florence. York’s work has been collected extensively throughout Canada and internationally, including at the Nation Gallery, the Art Gallery of Ontario, Musée (National) d’Art Moderne, Paris, and the Museum of Modern Art, Mexico. He was also made a member of the Royal Canadian Academy of Arts. 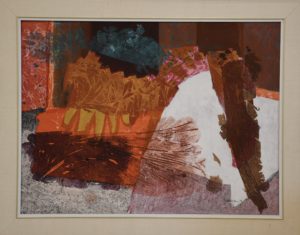