One of his generation’s most celebrated artists, Harold Town was born in 1924 in Toronto.
He was known for being an outspoken member of Painters Eleven and was largely responsible for the naming of the group. He studied at Western Technical-Commercial School and the Ontario College of Art and Design University for two years, from 1942 to 1944.
Town gained international recognition for his inventive “single autographic prints,” or SAP as Town often referred to them, which he made from 1953 to 1959. After his first solo exhibition in Toronto at the Picture Loan Society in 1954, the prints were immediately purchased by the Art Gallery of Toronto and the National Gallery of Canada. His prints won awards in Ljubljana, Yugoslavia and Santiago, Chile, and were acquired by the Solomon R. Guggenheim Museum and the Museum of Modern Art in New York City. Director of the Museum of Modern Art at the time, Alfred Barr, considered Town “one of the world’s greatest printmakers.” In his seminal text Abstract Painting in Canada, Roald Nasgaard remarks on Town’s Single Autographic Prints, stating “these are works of great finesse and nuance, rich in eccentric imagery. They are collage-like too, in the sense that all of Town’s work can be said to be composed like collages of disparate images and techniques.” (104)

By the mid-1960s and into the 1970s, Town had gained celebrity status as a Canadian painter. He was profiled in magazines like Maclean’s, and was on the cover of the Canadian edition of Time Magazine. Later on in his career Town was influenced by pop art, op art and assemblage, and his work became increasingly whimsical, as in the Toy Horses series.
Town represented Canada at the Venice Biennale (1956, 1964) and the São Paulo Bienal (1957, 1961), and was shown in Documenta III (1964) in Kassel, West Germany. He exhibited extensively and was the subject of major retrospectives, such as one at the Art Gallery of Ontario (1986). York University granted him an honorary doctorate in 1966. He was made an Officer of the Order of Canada in 1968. 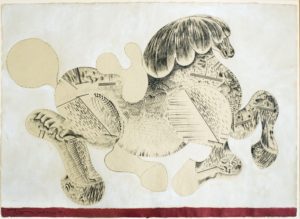 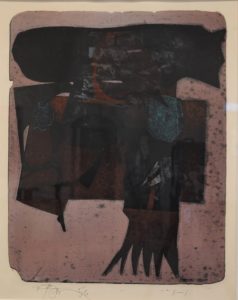