Born in Vancouver in 1937, Sorensen studied at UBC and the Vancouver School of Art under Arthur Erickson, Bill Reid and Jack Shadbolt. Shadbolt, who in turn had studied Hans Hoffman, invited American art critic Clement Greenberg to the school to discuss abstraction including the work of Rothko, Pollock and Kline.
In 1959 Sorensen traveled throughout Europe filling sketch-pads through Berlin, Paris, the Scandinavian countries, , the Loire valley, south through Spain, Italy, Greece and finally to Istanbul. Within a classical framework he saw the big American Abstract Expressionist breakthrough show in Paris, and discovered Mark Rothko among deKooning, Pollock, Kline and the other cutting edge American artists—all of whom had an influence on his painting.
After spending time in Europe and Mexico, and attracted to the work of Quebec artists like Riopelle, he made his way to Montreal, where he taught in the Fine Art Program at Bishop’s University. These influences helped shape Sorensen’s painterly approach to non-figurative art. He was part of the Montreal painting scene in the 1980s and 90s as it developed in the Post-Plasticien years.
In 1996, Sorensen was elected to the Royal Canadian Academy of Arts. His work is held in private, corporate and public collections including the Musée d’art contemporain de Montréal, the Winnipeg Art Gallery, the Art Gallery of Hamilton and more. 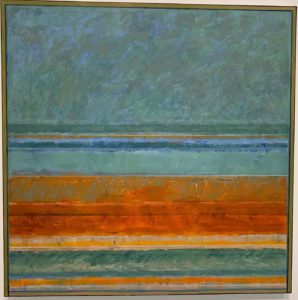