Jean Paul Riopelle is known as one of the most internationally-celebrated Canadian painters of the 20th century. He was born in 1923 in Montreal, Quebec. He attended the École Polytechnique in 1941, pursuing engineering with some architecture and photography. He then enrolled at the École des beaux-arts de Montréal in 1942 but later shifted his studies to École du Meuble, graduating in 1945. It was here that he studied with Paul-Émile Borduas, another acclaimed Québécois painter, known for founding the avant-garde Les Automatistes movement. Borduas and several of his students, including Riopelle, made up the core of the group that would go on to work, socialize and exhibit together from 1942-45.
In 1945 Borduas and Riopelle worked together in a shared studio in Quebec, experimenting freely with the automatic methods developed by the French Surrealists. In 1946 Riopelle first travelled to France, where he would return and settle the following year. Riopelle had his first solo exhibition at the Surrealist meeting place, Galerie La Dragonne in Paris, in 1949.
Unlike his mentor and close friend Borduas, Riopelle omits all figurative elements in his work. He pioneered a style of painting where large quantities of varied colours were thickly applied to the canvas with a trowel or palette knife. Roald Nasgaard describes the painter’s process in his text Abstract Painting in Canada, noting the application of “an overall sumptuous and radiant patchwork of color, vigorously laid down in fragmented touches, regularly sized and distributed, densely laced together, torqued, imbricated and moireed into a palpably tactile carpet of fleshy paint. This surface he then overlaid with linear spurts and rays of paint, white or often coloured filaments that criss-cross the canvas speedily like some turbulent cosmic event.” (81)
Riopelle became increasing successful while immersed in the Parisian cultural scene. He went on to participate in the biennials of contemporary art in Venice (1954) and Sao Paulo (1955) and was represented in New York. Subsequent major retrospectives of Riopelle’s work were held at the National Gallery of Canada in 1963 and at the Musée du Québec in 1967. He was made a member of the Royal Canadian Academy of Arts as well as a Companion of the Order of Canada (1969) and won the prestigious Prix Paul-Émile Borduas (1981). 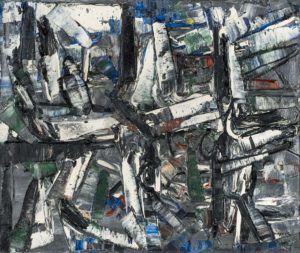 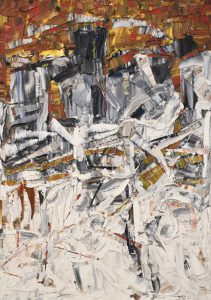