David Gerry Partridge (October 5, 1919 – December 11, 2006) was a Canadian artist and sculptor best known for creating “naillies,” works (sometimes very large) made of nails of varying sizes driven into plywood to different heights to form representational or abstract sculptures. He was born in Akron, Ohio in 1919. From 1928 to 1935 he lived in England, then aged sixteen moved to Canada. He attended Trinity College, Ontario between 1934 and 1938 before learning his trade at Hart House, University of Toronto from 1939-41. In 1941, he joined the Royal Canadian Air Force and served as a flying instructor until the end of World War II.

In 1945 he began teaching at Appleby College, Oakville, Ontario and then at Ridley College a year later. After the war he studied under various teachers in Canada, then in 1950 he obtained a British Council scholarship which took him to the Slade School of Fine Art for a year. Back in Canada he rejoined the staff at Ridley College and also taught at St Catharine’s Collegiate. Partridge co-founded the St. Catharines Public Library Art Gallery in 1952 (later absorbed into the Rodman Hall Art Centre at Brock University) where he became its first curator. In 1956 he retired from teaching, moved to Paris to study under Stanley William Hayter at the Atelier 17 studio, then moved to England. Partridge returned to Canada in 1958 and settled in Ottawa. It was there that he began to work on “naillies.” 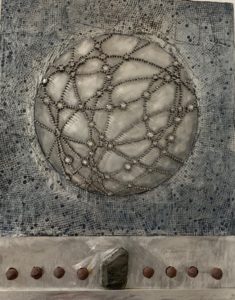