Alex Cameron is widely recognized as one of the most acclaimed contemporaries of the Group of Seven, Jack Bush, and the Painters Eleven. He was raised in Perry Sound, Ontario and studied at the New School of Art in Toronto in 1967. He was introduced to New York City’s Abstract Expressionist movement in the 1960s. He worked for well-known Canadian artist Jack Bush as a studio assistant in the mid-70s and was greatly influenced by his semi-abstract painting and well as his heavily applied impasto method of painting. Bush also introduced Cameron to the seminal American art critic Clement Greenberg, with whom he maintained an ongoing, close relationship. Other inspirations including the Group of Seven and the Painters Eleven can clearly be discerned in Cameron’s colourful abstracted landscapes depicting the Canadian wilderness. He was also surely inspired by lifelong friend and fellow Canadian painter David Bolduc.

Cameron’s artistic process is composed of painting “en plein air,” or painting in the open outdoors, and reimagining the landscape in energetic forms and glowing, whimsical colours. He is also known for applying pigment directly from the tube to the surface of the canvas. Cameron’s work of the late 1970s and early 1980s is marked by a greater attention to colour, more defined organic shapes and solid structures. He is historically grouped with the “third generation” of modernist abstract painters in Toronto, as he was a largely “home-grown” artist whose work began to appear in Toronto galleries in the mid-1970s. (Ronald Nasgaard, Abstract Painting in Canada, 257).

Cameron has held over 40 solo exhibitions since his first show at A Space Gallery in Toronto in 1971, including at the AGO in 1980. His work has been collected extensively both in Canada and internationally in institutions such as the Art Gallery of Ontario, the Royal Bank of Canada, and The Queen’s Silver Jubilee Art Collection. 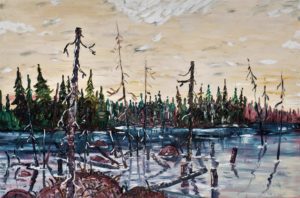