Paul-Émile Borduas (November 1, 1905 – February 22, 1960) was an internationally acclaimed Québecois artist known for his abstract paintings. He was the leader of the avant-garde Automatiste movement and the chief author of the Refus Global manifesto of 1948. Borduas had a profound impact on the development of the arts and of thought, both in the province of Quebec and in Canada.

Borduas was born on November the first, 1905, in Saint-Hilaire, Quebec. He spent the first period of his career working primarily as a church decorator and teacher. As a child, he had developed an early appreciation for the work of Ozias Leduc in the church at Ste-Hilaire, and apprenticed with him beginning in 1921, at the age of sixteen. In 1928, after a brief period of teaching in Montreal primary schools, Borduas traveled to France, where he studied decorative church painting under Maurice Denis and Georges Desvallières at the École des Arts Sacrés, Paris. He returned to Montreal in 1930, working again for Leduc and teaching. In 1937, he obtained a faculty position at the École du Meuble, remaining there until 1948; his students included Jean Paul Riopelle.

It was his discovery of Surrealism that marked a turning point for Borduas; he read works by André Breton, who defined Surrealism as “pure psychic automatism,” and began experimenting with gouache in non-representational works. The 1942 exhibition of his first Surrealist works, held at Montreal’s Théâtre de l’Ermitage, garnered rave reviews. The artist soon applied his experiments to oil and exhibited along with Riopelle, Barbeau, Fauteux, Pierre Gauvreau, Fernand Leduc and Jean-Paul Mousseau, a group labelled the Automatists. When Borduas published the Refus Gobal in 1948, his attacks on Catholicism and nationalism caused an uproar in the media, and he was summarily dismissed from his teaching position at the École du Meuble.

Paul-Émile Borduas has been the subject of countless international exhibitions, both during his lifetime and posthumously, and lends his name to the Prix Paul-Émile Borduas awarded each year to a distinguished Quebec visual artist. 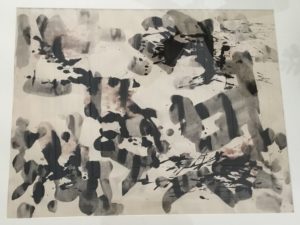