Molly Lamb Bobak was a Canadian teacher, writer, printmaker and painter working in oils and watercolours. She was born in Vancouver February 25, 1920. During World War II, she was the first Canadian woman artist to be sent overseas to document Canada’s war effort, and in particular, the work of the Canadian Women’s Army Corps (C.W.A.C), as one of Canada’s war artists. The daughter of celebrated photographer Harold Mortimer-Lamb, Bobak longed to be a painter like her family friend the Group of Seven’s A.Y. Jackson

Overseas she famously depicted female military training as well as dynamic scenes of marches and parades. Upon her return from the U.K., Bobak married fellow war artist Bruno Bobak. In 1960 their family moved to Fredericton, New Brunswick, where they lived and worked for over half a century. In one of the first generations of Canadian women who earned their livings as artists, Bobak became known for her paintings, drawings, and watercolours. For her role in the Second World War and many other accomplishments she was elected to the Royal Canadian Academy of Arts in 1973 and presented with the Order of Canada in 1995. 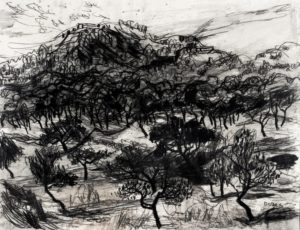